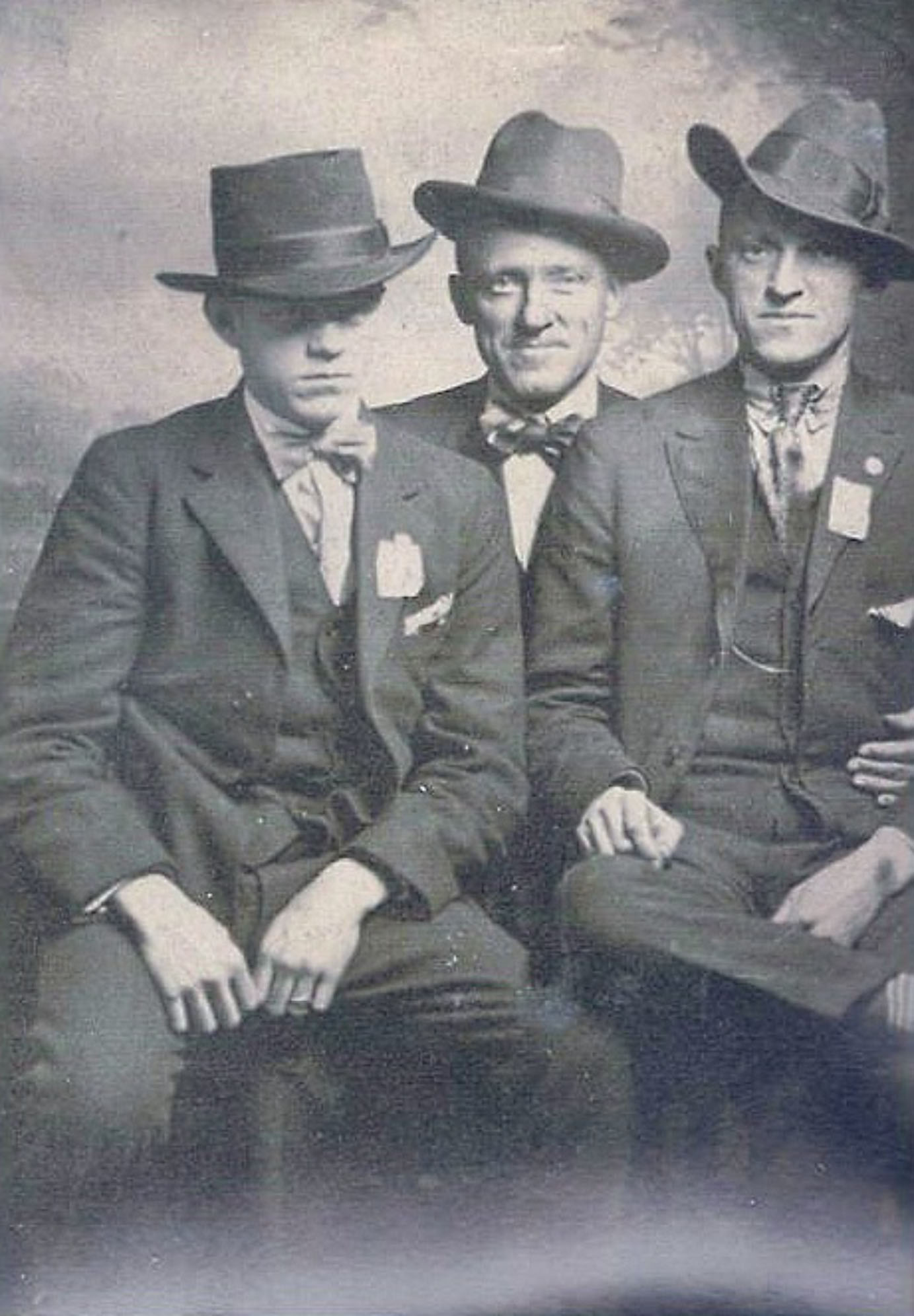 This is a photograph of Uncle Jack on the left, Daddy Boyd in the center and Uncle John on the right. It was taken the day Uncles John and Jack went to register for the draft. During WWI all males between the ages of 21 and 30 had to register for the military. As far as I know neither one was required to serve.

Uncle John was the oldest child. He was born in 1897 in Marshall County, Tennessee, probably at the home of his Cavnar grandparents.

He married Lottie Louise West May 17, 1921. We called her Aunt Liza. I don’t remember being around her family but I got the idea they were a bit higher on the social ladder then we. That usually meant they could make a living without getting really dirty.

My mother was around six years old when Uncle John and Aunt Liza married. I think they became like a second set of parents for her since her own parents were in their early 40s when she was born, the ninth child. They were certainly like a second set of grandparents for us grandchildren. With so many of us around when I was born the lines of relationships blurred. It took me a long time to figure out just how I fit into the greater scheme of things.

It was nothing for me to go spend the night with them. Our cousin Sam lived with them when he was in Vanderbilt because they lived very near the campus. Sam and Uncle John built and flew model airplanes.

We lived with them for a couple of years in the late 40s, as I have said.

Mama and Aunt Liza were very close. That was what was so surprising about what happened after Aunt Liza died.

Aunt Liza had had a stroke and was in the hospital. She was doing much better and it was suggested the she would be able to go home. Of course, Mama as the family medical person (RN) had been staying with her. Aunt Liza was doing so much better Mama had come home to rest. It came as a shock when we got the call that she had died in the hospital.

What was an ever bigger surprise came a couple of weeks later. Someone called Mama and asked where “Johnnie” was. Mama said she thought he was either at work or at home. The caller told her that the house was vacant with a For Sale sign in the yard.

Mama tried to call him at his place of work but I don’t think he would talk to her. The upshot of the matter was that he had married a woman with whom he apparently had had some sort of relationship for long time. Mama knew Aunt Liza had been anxious about the woman, Elsie Rader, being around after Elsie moved back to Nashville when her husband went to prison.

Uncle John completely estranged himself from the family after that. I think Sam used to go visit him when he brought his children to Nashville, but he is the only one I know who did. I never saw Uncle John after Aunt Liza’s funeral. Shirley Ann says he came by the house to bring some things Mama had made for Aunt Liza. I just remember him telling Mama to take anything she wanted out of the house on Capers. Of course, she didn’t.

When Uncle Jack died my father asked Mama if she was going to call and let Uncle John know. She said very firmly she had no intention of doing so since he had so distanced himself from the family. Papa went and called Uncle John. Papa never told us what Uncle John said but you could tell he was visibly shaken.

Uncle John and Uncle Jack came of age along with the automobile. They both worked repairing them. Uncle John used to work on Papa’s cars in the back yard. Uncle John was also always looking for money making schemes. I remember one time he started growing worms in the back yard. Apparently an outside light got left on and the worms all crawled away.

One of my fondest memories is of him and me sharing bowls of Rice Krispies before bedtime. I will blame my addiction to late night snacking on him.