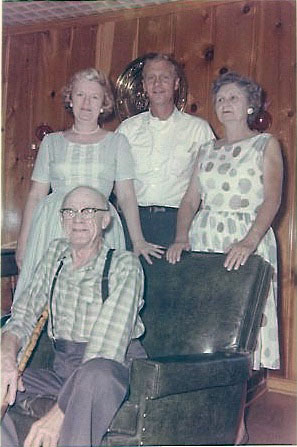 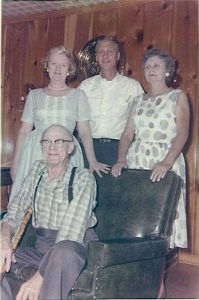 He and Aunt Marie lived in Madison, Tennessee. I first remember them living in an old farm house. I know they had some acreage because he had a tractor, which we all thought was pretty cool. When we went out there he would take us for rides on the tractor. Probably never went over 3 MPH, but we thought it exciting. Probably where i get my love for tractors.

After that he and Jack, Jr. built houses next to each very near the farm house. I believe it was just around the corner for the first house. When I say “built” I meant built…themselves.

Uncle Jack was a craftsman and somewhat of a dreamer. He told the story of going into Lewisburg as a child and seeing a Wells-Fargo freight wagon. He thought it the most wonderful thing he had ever seen. After they moved to the new house Uncle Jack built a miniature to-scale Wells-Fargo wagon. It was beautiful; dark green with gold pin-striping. He got a pony to pull it. I think the pony was a Shetland pony but may have been a miniature. At any rate it was the perfect size to pull the wagon. Uncle Jack made patent leather harness for her.

I think the pony’s name was Dixie. She had a foal named Pixie. (It may have been the other way around). Uncle Jack used to take the foal into the house and feed her crackers when Aunt Marie was not around.

We all went out there when my son Bill was a baby just learning to walk. The foal wanted to play with Bill but he was afraid of her. He would toddle away from me and Pixie (or Dixie) would try to engage him. Bill would come running back to me and plop down in my lap. I was sitting on the ground. Pixie (or Dixie) kept coming up to me and nudging me. I finally realized she was trying to sit in my lap like Bill was doing. I am not at all sure that she knew she was not a human.

Uncle Jack also built sulkies, carts that were pulled by small ponies like Dixie (or Pixie) that children would compete with at horse shows. Uncle Jack built frames on the back of the sulkies. Big skirts would put over the frames so that it looked like little girls were wearing hooped skirts a la antebellum days. The little boys attired in top hats and tails would drive the rigs. I remember them at the Tennessee State Fairs. Jack, Jr. (Junie to me) told me he got calls from people wanting Uncle Jack to make them one long after he died.

This photo was taken shortly before Uncle Jack died. Aunt Bea had come to visit and they took this photo.