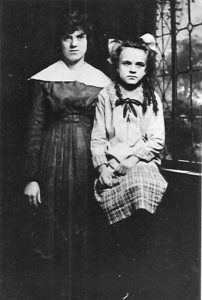 Sissie, as we all called her, was born in-between the two baby girls who died. She was born September 10, 1906 at the family home in Marshall County. We children called her Sissie but her siblings called her Sis.

It was said that she was a “seven month” baby, which meant she was premature. Mama said she thought she wasn’t expected to survive and that is why she had only a middle initial. She guessed they didn’t want to waste a name of her.

Because Sissy always had health problems she was a bit neurotic. She definitely had health problems all her life that probably contributed to her self-centered behavior. As kids I don’t think we realized how much baggage she carried. It was only after I was almost grown that I came to realize how much tension she could bring to the family. To us children she was just an adult in a child-size body who was fun to play with.

Sissie was less that five feet tall. She had to order shoes from a specialty catalog. She bought her clothes, when she could find them, in the children’s department.

I guess my grandparents knew they were responsible for her well-being long after she was grown. She was sent to secretariat school, but that didn’t work out because of her slight palsy. Milliney became her profession and she was very good at it. She is the only one of the children beside Mama who received anything like an education beyond public school that I know of.

She worked for Loveman’s Department Store in Nashville. She and the other four or five milliners plied their trade in a true sweat shop. There was a little narrow room off the Women’s Department on the third floor of the store. There was very little light and the ladies vied for the work benches nearest the windows. There were big metal steam boxes into with felt hats would be placed so that the felt could be stretch over wooden hat forms. The workshop was blazing hot in the summer and cold in the winter.

After the fashion for hats slowly decreased and department stores, including Lovemans gave way to malls, McHenry, the man for whom she worked continued with a hat shop in Nashville. She worked there until she retired. After all the hat shops closed she went to Kentucky to stay with our cousin Mary Lou Fuqua for a while. That didn’t work out all that well. When she came back to Nashville she was suffering from dementia and was placed in a nursing home where she died in 1984.

Sissie never married, but she was always there for the grandchildren. 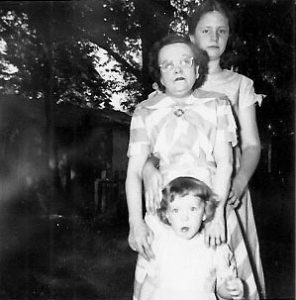 This photo was taken when Shirley Ann was about four and I was about thirteen. As you can see I am not “full-growed” yet and I am already taller than she was.

Callie May and Mattie Cavnar Boyd