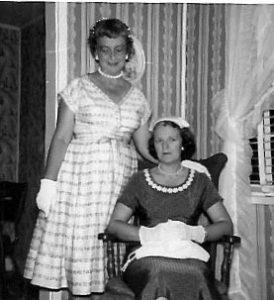 Georgia Othello Boyd Smith was always “Tolly” to us children. Not “Aunt Tolly”… just Tolly. I never knew where the nick name came from. There were people who called her Polly, Othey, or even Othello, but to us she was Tolly. I never heard anybody call her Georgia.

Tolly was born in Marshall County December 1, 1909. In 1929 she married Sampson Bauman Smith. Big Sam, as he was known in the family, died suddenly in 1938 leaving Tolly with two son; Sam and Spud. I assume that is when they started living with Nanny and Daddy Boyd and Sissie.

Big Sam had been raised by his sister and brother-in-law, Granny Tom and Pappy Oakley. I can not even begin to tell you what their names were other than Granny Tom and Pappy. They lived about three blocks from the house on Woodland Street my grandparents rented. I wonder if that was planned so they boys would have two sets of grandparents around. I used to go hang out at the Oakley’s house because Granny Tom was a wonderful cook and she always had some wonderful treat.

Tolly was always an easy target and generous to a fault. Cousin Richard Gebhardt used to come for extended visits during the summer. One time Tolly sent us to the corner drug store for something. She told us to tell the owners to “Charge it to Miz Smith”. We thought that was pretty cool. That was the summer we discovered Dr. Pepper. At that time Dr Pepper’s selling point was that is was good at “Ten, two and four”. Richard and I took that to mean that we should imbibe one at ten o’clock, two o’clock and four o’clock. So three times a day we went to the drug store, bought a Dr. Pepper and split it. Of course, we “charged it to Miz Smith.”

It was quite a shock for Tolly when she got the bill. Our parents were not too happy with us but Tolly just laughed it off. It became a running joke. If you want something all you had to do was “charge it to Miz Smith”.

Big Sam worked for Mr. Smith, the President of National Stores, a chain of department stores headquartered in Nashville. After Sam died Tolly went to work there and stayed for 40+ years. Tolly was the fastest typist I have ever seen. They had to hire two people to replace her when she retired. Tolly and Mama eventually moved into a high rise apartment in Madison. The owner hired Tolly to do one-time job. When she saw how fast Tolly could work she hired her full time and eventually Tolly was made manager.

During WWII rationing children were only allowed two pairs of shoes a year. They were pretty much sturdy, brown oxfords that could be resoled and reheeled before being passed on down the line to younger children. Department stores were allowed so many pairs of dress shoes for store display. Tolly always got the buyers to get the display shoes in my size. I was probably the only child in America to spend the entire war wearing black patent leather Mary Jane slippers. I hated them. I wanted brown oxfords like all the other children so I called Tolly and whined about it. Pretty soon one of the warehouse men showed up with brown oxfords for me. You didn’t even have to ask.

Callie May and Mattie Cavnar Boyd